Should I take my pension now?

As you get older, annuity rates tend to get better. The assumption is that as your age increases, you will be nearer death and therefore the insurance company will not have to make payments for as long. However, the increases for age are not significant and the annuity rates are not based on you reaching a specific birthday. Most companies assess your age based on years and months, not whole years.

The cost of delay explained

We have used figures for a 60 year old healthy male. 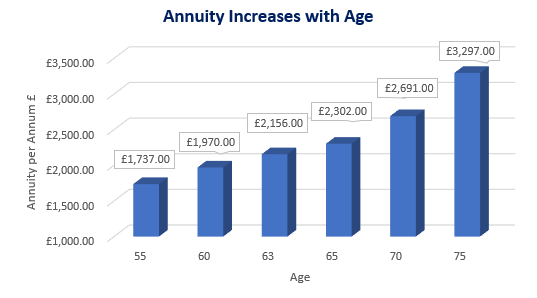 In this example our 60 year who chooses to defer taking his annuity for another 3 years will be over age 74 before he has recovered his money.

We have run the same calculation assuming the the growth on your fund is 4% (net) and for a 60 year old leaving the benefits until age 63 he will you be nearly 76 before he is better off.

If you buy your annuity now you will have no further investment risk. You will have locked yourself into a guaranteed income. Having experienced some volatile times in the stock market there is a danger that just before you want to buy your annuity, your pension fund falls in value.

Some people choose to place their money in cash or deposit funds to avoid the market volatility. However, these secure investments are not normally expected to provide much growth and in the meantime you would be losing out on annuity payments. A cash fund in the longer term is unlikely to outperform the income that you could have received from the annuity.

Our feeling is that you should take all the time you need to make the right decisions for you. However, having made the decision which option you require we have not often seen people benefit by not acting or buying their annuity immediately. This has been as a consequence of volatile pension funds and falling annuity rates. There are other alternatives such as pension drawdown income vehicles which are becoming increasingly more popular.

Contact us to find out when it is the best time to take you pension and maximise annuity rates.